Citizens Bank is moving its longtime regional headquarters to Four Gateway Center, representing another big shake-up in the Downtown office market. The move is another win for the Hertz Investment Group, owner of the four-building complex near Point State Park. ( more ) 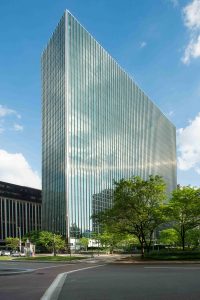 In August 2020, Hurricane Laura turned the structure at 1 Lakeshore Drive into a patched-up eyesore. Work has begun on the iconic Lake Charles structure, but no information is available at this time about how long the project could take or a tenant likely to lend its name. ( more )

Work on Capital One Tower set to start in August

The Hertz Investment Group, owner of the Capital One Tower, released an update Tuesday, announcing that work on the vacant building is scheduled to begin next month. ( more )

Two different reports demonstrate the ongoing challenges Pittsburgh’s office market continues to face in the wake of the pandemic, as well as some modest signs of improvement. ( more )

Parking has served as a primary component of historically auto-centric mobility patterns in the U.S. for more than a century. Well-cited research from the University of California at Berkeley’s Department of Civil and Environmental Engineering suggests that there are about 3.4 parking spaces in America for each car. Noted transportation scholar Donald Shoup observes in his 2018 title, Parking in the City, that “the area of parking per car in the United States is thus larger than the area of housing per human.” ( more )

Building owners hoping to create a literal ‘BUZZ’ around Baltimore

The owners of a Baltimore building are creating some local buzz by trying something new with their rooftop. It may look like an average downtown building at St. Paul and East Fayette streets, but something buzzworthy is happening on top. WBAL-TV 11 News visited an apiary 20 floors up from downtown atop the Wells Fargo Tower. ( more )

Hertz Investment Group has chosen JLL to lease and rebrand the Center at 600 Vine, a 625,765-square-foot, Class-A office building at 600 Vine St. in downtown Cincinnati. ( more ) 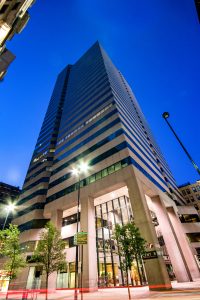 ‘More Magnet Than Mandate’: Dickie McCamey to Trim Footprint by 20% in Pittsburgh Move

Dickie, McCamey & Chilcote signed a 15-year lease to move into Four Gateway Center in its headquarters city of Pittsburgh by April 2025, closing out nearly four decades of occupancy at Two PPG Place. ( more )

Law firm Dickie, McCamey & Chilcote PC has signed a 79,719-square-foot office lease at Four Gateway Center, a 1.5 million-square-foot office building in downtown Pittsburgh. The firm will relocate from its longtime space at PPG Place to occupy five floors at Four Gateway Center, which features a newly built conference facility and fitness center, in spring 2025. Dan Adamski, Nick Francic and Reid Mauro of JLL represented the tenant in its site selection and lease negotiations. The representative of the landlord, Hertz Investment Group, was not disclosed. ( more )

CLEVELAND, Ohio — The Fifth Third Center, Cleveland’s sixth-tallest building, is up for sale, less than a decade after it last changed hands. ( more )

Hertz Investment Group recently inked approximately 90,000 square feet of new leasing activity for 2021 and is in lease negotiations with another 11,000-square-foot new tenant in Brookhollow Central towers I and II, a class-A office complex located in the business hub of Houston. These transactions signal increasing optimism for Houston’s office market, which has been hard hit by the pandemic and upturn in oil prices. ( more )

Hertz Investment Group, a real estate investment firm known for the acquisition and management of more than 16.5 million square feet of Class-A office space across 21 US cities, is moving into the multifamily housing sector. ( more )

People on the Move

We are pleased to welcome Tim McCarthy to the Hertz Investment Group. A 10-year industry veteran, he joins as Vice President, Asset Management in the firm’s Pittsburgh office. ( more )

Despite several Covid-19 delays and Hurricane Ida, Hertz has successfully executed several new leases, renewals and expansions, as well as mitigated and repaired damage cause to properties as a result of the hurricane. ( more )

With New Orleans Mostly Dark, a Co-Working Office Lights Up

Co-working offices may appeal to remote workers who don’t want to work at home full time and live too far from their corporate offices. But there’s another reason co-working spaces may be helpful, as New Orleans illustrates. ( more )

After more than a year of remote working, Greater New Orleanians are returning to their Downtown offices. Many will return to offices owned by Hertz Investment Group, the largest owner of Class A office space in New Orleans. ( more ) 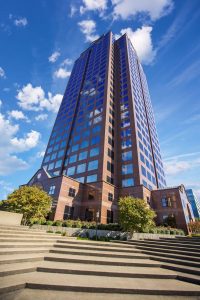 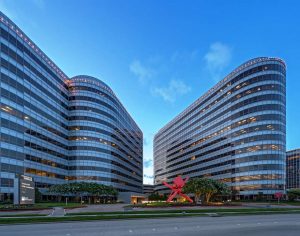 That figure popped up in documents filed Thursday, four days after California-based Hertz announced that it had bought a cluster of Midwest office properties in the company’s largest acquisition to date. The combined deals, in Cleveland, Milwaukee and Indianapolis, carried a price tag of $416.9 million. ( more )

Exceeds assessed value, but lower than last time it was sold. ( more )

Two of the largest office buildings in downtown Indianapolis have been sold as part of a $416.9 million, four-building acquisition by Hertz Investment Group, the company announced Monday morning. The Salesforce Tower and Circle Building contain 1.2 million square feet of space. Salesforce Tower & Circle Building (formerly known as Chase Tower and Bank One Tower) and the PNC Center were part of a 3.1-million-square-foot package, Santa Monica, California-based Hertz said.… ( more )

North Point, the office complex at 901 Lakeside Ave., is now one of Hertz Investment Group’s three skyscrapers in downtown Cleveland. The prior owner, Chicago-based Equity Commonwealth (NYSE: EQC), announced Monday, Aug. 29, that it has sold the property and three other office buildings in the Midwest for a total of $421.9 million.… ( more )

The 100 East office tower in downtown Milwaukee sold in a $416.9 million portfolio sale to Hertz Investment Group of California.… ( more )

Hertz may add North Point to its portfolio

Hertz is the new owner of Riverfront Plaza. The two-tower, 22-story, Class A office complex is located downtown next to the James River… ( more )

Hertz Investment Group, downtown Jackson’s dominant landlord, has added to its Central Business District holdings with a $6.2 million acquisition of the two-tower City Centre and its parking garage at 200 Lamar St.… ( more )

The new owner is an affiliate of Hertz Investment Group, a California-based buyer that entered the Cleveland market earlier this year by purchasing Fifth Third Center on Superior Avenue.… ( more )

Hertz Investment Group, which has become the dominant landlord in Jackson’s Central Business District, has completed a $417 million acquisition… ( more )

Hertz Investment Group (HIG) today announced it has acquired from Equity Commonwealth a portfolio of six Class A office buildings in the Southeast totaling more than 3-million square feet.… ( more )